While all eyes have been focused on GameStop and a handful of other heavily-shorted stocks as they exploded higher under continuous fire from WallStreetBets traders igniting a short-squeeze coinciding with a gamma-squeeze, the last few days saw another asset suddenly get in the crosshairs of the ‘Reddit-Raiders’ – Silver.

On Thursday, we asked “Is The Reddit Rebellion About To Descend On The Precious Metals Market?” … One WallStreetBets user (jjalj30) posted the following last night:

Silver Bullion Market is one of the most manipulated on earth. Any short squeeze in silver paper shorts would be EPIC. We know billion banks are manipulating gold and silver to cover real inflation.

Both the industrial case and monetary case, debt printing has never been more favorable for the No. 1 inflation hedge Silver.

Inflation adjusted Silver should be at 1000$ instead of 25$. Link to post removed by mods.

Why not squeeze $SLV to real physical price.

Tldr- Corner the market. GV thinks its possible to squeeze $SLV, FUCK AFTER SEEING $AG AND $GME EVEN I THINK WE CAN DO IT. BUY $SLV GO ALL IN TH GAINZ WILL BE UNLIMITED. DEMAND PHYSICAL IF YOU CAN. FUCK THE BANKS.Disclaimer: This is not Financial advice. I am not a financial services professional. This is my personal opinion and speculation as an uneducated and uninformed person.
…and judging by the unprecedented flows into the Silver ETF (SLV) they just got started…
SLV saw inflows of almost one billion dollars on Friday, almost double the previous record inflow for this 15 year-old ETF. 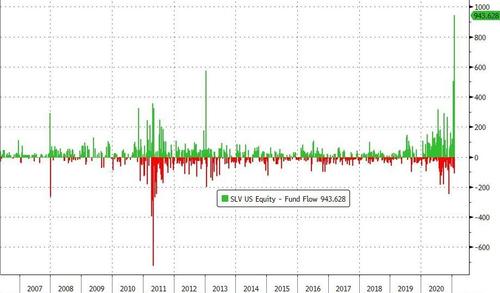 Source: Bloomberg
Which helped prompt a spike in SLV off Wednesday’s lows of over 11% (and note that every surge in price was mimicked by gold, but gold was instantly monkey-hammered lower after the spike).